Ireland and back again: A good story and a good poem 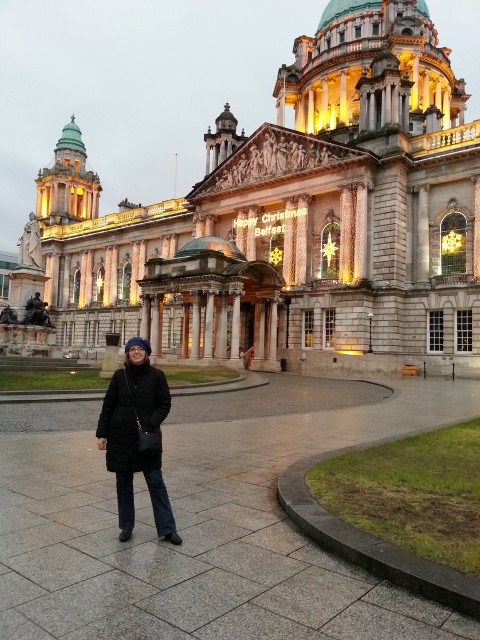 Here’s your Poet Laureate in front of the City Hall in Belfast, Northern Ireland, on January 2nd, the night before our return to the US and just two days before political riots broke out again in this beautiful but embattled city. At this moment, all was calm and well, Irish. My husband Frank and I went from here to a bookstore, to a pub for a pint, and then to a wonderful seafood restaurant. After a memorable meal we walked to a small dinner theater to hear an Irish country singer, Maria Doyle Kennedy, accompanied by her amazing guitarist husband, Kieran. Why did she look so familiar? She looks sooo familiar, I said to Frank. When we got home, a little google research revealed why: Maria Doyle Kennedy, the most evil character(to date) on Downton Abbey!

It wasn’t all pubs and famous actresses. We went to  Northern Ireland to the city of Coleraine to join  the Irish in-laws’ celebration of our daughter’s summertime California wedding. Yes, to meet the rest of the family. At the reception, I met my new son-in-law Shane’s Uncle Pat, a scholar and a great friend of poetry. We had a bit of a visit, got on the subject of the movie “Lincoln,” and then the actor Daniel Day-Lewis. Pat mentioned that Daniel is the son of the late Poet Laureate of England, Cecil Day-Lewis. Pat then recommended a poem of Day-Lewis to me; I have a feeling this was his point all along. The poem, “Walking Away,” is about a father’s recollection of a son’s first day at school, of the bitter-sweet partings and the “worse partings.”

How fitting it was to read this after our daughter’s wedding celebration, a time of so much joy and yet such a large leave-taking. How grateful I am to read and re-read “Walking Away.” As I emailed Pat, how much subtle work this poem is doing to get the reader ready to hear what might otherwise be an abstract aphorism at the end if simply stated alone. This is the success of a memorable poem. Anyway, I think it is so fitting for the many partings we each face in our lifetimes, both the joyous and the “worse.”

Well, read the poem yourself and let me know what you think.

It is eighteen years ago, almost to the day –
A sunny day with leaves just turning,
The touch-lines new-ruled – since I watched you play
Your first game of football, then, like a satellite
Wrenched from its orbit, go drifting away

Behind a scatter of boys. I can see
You walking away from me towards the school
With the pathos of a half-fledged thing set free
Into a wilderness, the gait of one
Who finds no path where the path should be.

That hesitant figure, eddying away
Like a winged seed loosened from its parent stem,
Has something I never quite grasp to convey
About nature’s give-and-take – the small, the scorching
Ordeals which fire one’s irresolute clay.

I have had worse partings, but none that so
Gnaws at my mind still. Perhaps it is roughly
Saying what God alone could perfectly show –
How selfhood begins with a walking away,
And love is proved in the letting go.

Filed under Laureate's News, On Poetry

12 responses to “Ireland and back again: A good story and a good poem”